Welcome to the Jam: NBA® 2K21 MyTEAM Season 9 “Out of This World!" Available Friday

Celebrating the game’s debut season structure with 8 successful MyTEAM Seasons, Season 9 - Out of This World! - is a three-week long season where players can experience new sets of rewards and challenges including:

Check out the full Courtside Report here for all the details on the latest season and the accompanying trailer here.

Remember that all progress players make on the PlayStation 4 and Xbox One versions of NBA 2K21 will transfer to the PlayStation 5 and Xbox Series X|S versions within the same console family via dual-access. More information is available at the dual-access FAQ. Additionally, NBA 2K21 is now available on Xbox Game Pass, Microsoft’s subscription service, for players that want to jump in anytime. More details can be found here. 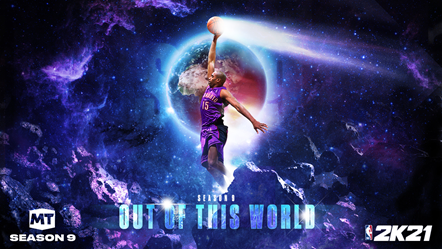